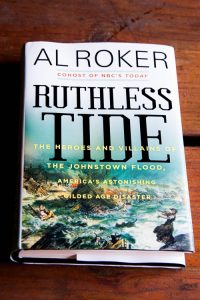 In my opinion, it rehashed much of  “The Johnstown Flood” by David McCullough. It didn’t provide enough new insights.

Here’s the thing: From ages 7 – 18, I lived in a small town in the Allegheny Mountains (the Laurel Highlands) about 30 miles from Johnstown.  Johnstown was the “city.” We drove to Johnstown frequently in order to access services that we didn’t have in our own town.  (Johnstown was much closer to us than Pittsburgh.)

At my school, we studied the Johnstown Flood of 1889 for weeks. We had to write essays about it. We toured the flood museums in downtown Johnstown and at the site of the South Fork dam that caused the flood. (Yes, multiple museums about the the Johnstown Flood exist.) We also visited the stone railroad bridge where many flood victims burned to death, as well as the cemetery where Johnstowners buried many of their flood victims. We saw the graves of the unidentified flood dead.

After college, I moved to Johnstown for three years for a job. I worked downtown. Every day, I walked past monuments to the victims of Johnstown’s three major deadly floods. I walked down the streets that the flood destroyed. I drove past and under the infamous stone railroad bridge. (Route 56 goes under the very edge of this bridge.)

After I left Johnstown, I purchased and read “The Johnstown Flood” by David McCullough.

Roker listed McCullough’s book as a source document. In fact, under his section “A Note on Sources and Further Reading,” Roker says, “The best-known modern book on the subject is David McCullough’s groundbreaking The Johnstown Flood, first published in 1968; its nearest predecessor similar in scope was Richard O’Connor’s Johnstown: The Day the Dam Broke, published in 1957.”

If you aren’t familiar with the Johnstown Flood of 1889, then first note this: downtown Johnstown is in a valley at a river confluence. The South Fork Fishing and Hunting Club was an exclusive, secretive, private club upstream from Johnstown.  Many of the very wealthy industrialists of Pittsburgh, including Andrew Carnegie, Henry Clay Frick. Andrew Mellon, etc, belonged to this club.

On the days leading up to May 31, 1889, a significant amount of rain fell. On May 31, the dam on the private club’s private lake failed. The lake emptied into the valley below. This caused the Johnstown Flood of 1889.

To Roker’s credit, he did focus a great deal more than McCullough did on the actual members of the South Fork Fishing and Hunting Club.

However, if you needed to read one book – and only one book – on the Johnstown Flood, I recommend McCullough’s book over Roker’s book.

As a side note, Johnstown is upstream from New Kensington and Pittsburgh. McCullough’s book noted that flood debris and flood victims were carried to at least Pittsburgh. Here is my blog post about that.