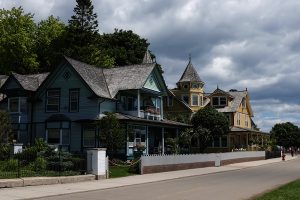 Europeans – first the French – came to Northern Michigan, and Mackinac Island, in the 17th century.

In 1763, a trader named Alexander Henry took overnight refuge in Skull Cave on Mackinac Island after fleeing from Native Americans during Pontiac’s War. Henry later wrote about the night that he spent in Skull Cave. Henry recalled that when he awoke in the morning, he was laying on a pile of human skulls and bones.

I list Skull Cave first because the signage on the island makes a big deal about “Skull Cave.” I also purchased a book or three that talks up Skull Cave.

However, Skull Cave no longer has any human skulls or bones.

I googled “what happened to the skulls in skull cave?” and the first page results don’t really tell me anything. The official tourism websites skirt around the whole issue.

So, where are the skulls and bones?

I heard tales of what happened to so many mummies that Victorian Europeans and Americans removed from the pyramids in Egypt. So, I feel uncomfortable about the lack of skulls in Skull Cave.

I thought about visiting Skull Cave this summer just to get a photo for this blog. However, Skull Cave sits on top of a hill. The road’s too steep for me to ride my bike, so I would have needed to walk up and down. It was humid that day. I just didn’t have it in me to visit Skull Cave this year. 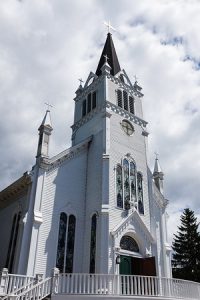 Madeline (Marcotte) LaFramboise was born on Mackinac Island in 1780. She married Joseph LaFramboise, a fur trader, at the age of 14.

Little more than a decade later, Madame LaFramboise became the widow of a murder victim. She raised two kids and ran the family business on her own. Successfully.

Madame LaFramboise donated heavily to the Catholic parish on Mackinac Island. She donated land across the street from her own home for the building of the new Ste. Anne Catholic Church.

Per her wishes, Madame LaFramboise was laid to rest under the church’s altar.

But she didn’t get to rest for very long under the church altar.

In the 1960’s, parishioners moved Madame LaFramboise and her family to the churchyard. They replaced her original resting place with a basement gift shop / parish center / museum. Several decades later, they moved her to a new crypt.

Folklorists claim that Madame LaFramboise’s ghost is still upset about the removal of her grave from under the altar.

Ste. Anne is one of my favorite buildings on the island. The summer before my sister Anne got married, I lit a candle at Ste. Anne for my sister’s future. Daisies (my sister Anne’s favorite) grew in front of the church.

This year, I visited the church just so that I could tour this famous basement that caused the ghost story. There is a little garden outside the basement door with picnic tables, statues, benches, and stations of the cross.

A family ate their picnic lunch at one of the tables.

The sign on the basement door said, “Bottled Water for Sale in the Gift Shop.”

I went into the basement. I toured the little basement museum about history of Catholicism in Michigan. (Spoiler: Father Marquette plays a key role in the exhibit.) I walked past the gift shop that sells religious articles and bottled water.

No ghosts to be seen.

3.) A Mayonnaise Jar Buried Behind A Cottage 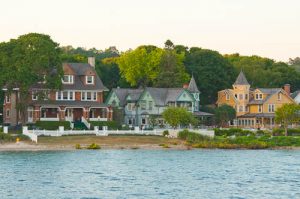 I and my husband Jonathan toured Mackinac Island Cemetery during one our July day trips to the island. It was my birthday. It was very hot.

We were alone in the cemetery until two men arrived. One of the men wore a t-shirt that said “Mackinac Island Fire Department” and unlocked a shed at one edge of the cemetery. Based on the man’s t-shirt and his possession of a key to this shed, I decided that this man must be an island authority figure. I decided to eavesdrop on the men’s conversation.

The man with the fire department t-shirt and the key explained to the other man that a person’s ashes had been placed in a mayonnaise jar and buried behind one of the islands “cottages.”

Now, these large Victorian “cottages” dot most of island. Some sit on privately owned land. Other cottages lease state park land. Most of these summer homes are larger than my own Victorian house in Pennsylvania.

(Sidenote: Mackinac Island and the nearby communities on both peninsulas have volunteer fire departments. (Emergency vehicles ARE permitted to drive on the island. At least they don’t use horse-drawn fire trucks!) A few years ago, we read about a structure fire in the island’s downtown business district. Ordinarily the mutual aid firefighters respond by boat. However, this time the firefighters from St. Ignace arrived by helicopter because the lake still had ice and therefore was not open to boat traffic.)

Do you have a special place where you wish to rest in peace?