Last post for now about Mackinac Island! Next week I promise to blog about five cemeteries on the Upper Peninsula.

As I mentioned, each summer we visit Mackinac Island. Just like thousands (millions?) of others, we leave our car on the mainland and ride a ferry on Lake Huron.  We all come to the island to see:

If you ever watched the movie “Somewhere in Time” with Christopher Reeve and Jane Seymour, then you watched scenes from Mackinac Island.

These three things about the island remind me of the towns that I consider home in Pennsylvania:

1.) The Victorian “Cottages” and the Island’s Preservation Efforts 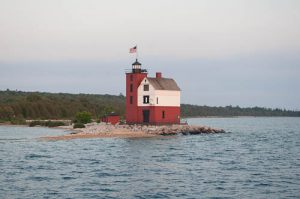 You will find these “cottages” all over the island. These summer homes are all larger than my own house, but they inspire me since they are from the same time period as my own house and neighborhood.

By the 1970’s, maritime travel no longer depended upon Round Island Lighthouse as a working lighthouse. Local influencers planned to tear down the lighthouse.

A grass-roots campaign saved the lighthouse.

This lighthouse is one of the most prominent landmarks for Mackinac Island tourists and it is featured in a scene of “Somewhere in Time.”

In my home neighborhood, we hear from people who want to tear down the buildings here that have a history, the very buildings that could define our community’s future.

2.)  The Resourceful and Self-Sustaining Residents. 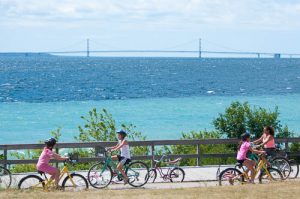 The residents on Mackinac Island and the Upper Peninsula remind me of people that I know from growing up in rural Central and Western Pennsylvania.

Once Lake Huron starts to freeze, the ferry boats to Mackinac Island shut down. Later, after the Coast Guard measures the ice and finds it sufficiently thick, the residents can travel across the lake to the mainland by snowmobile. Once the ice starts to thaw, residents must wait for the ferry boats to run again. (Granted, Mackinac Island does have its own airport and people do fly on and off of the island year-round. However, this also depends highly on the weather. Mackinac Island air travel can be quite dangerous.)

The towns that I call home in Pennsylvania don’t see nearly the amount of lake effect weather that Northern Michigan does. (Lake Erie does impact us, but I know that this doesn’t really count.) However, I grew in the Appalachian Mountains near Pennsylvania’s highest point (Mt. Davis in Somerset County) so I empathize about the isolation of winter.

Now, the island and the nearby communities on the mainland all have volunteer fire departments. (Fire trucks are permitted to drive on the island. At least they don’t use horse-drawn fire trucks!) A few years ago, we read about a winter / spring structure fire in the island’s downtown business district. Ordinarily the mutual aid firefighters respond by boat. However, this time the firefighters from St. Ignace arrived by helicopter because the lake still had ice.

Volunteer fire departments are important to the culture of all of the places that I call home in Pennsylvania. I spent the first years of my life in a very small town in Central Pennsylvania (near Harrisburg) that had only one real road. The town’s one grocery store sat directly across this road from the fire station. The fire chief owned the grocery store. I used to watch him run out from behind the deli counter whenever the whistle blew at the fire station. (My dad – also a volunteer – drove the town ambulance.)

We later moved to another rural Pennsylvania town where the long-time fire department president also taught Vocational Agriculture at my high school.

What special places remind you of your home?