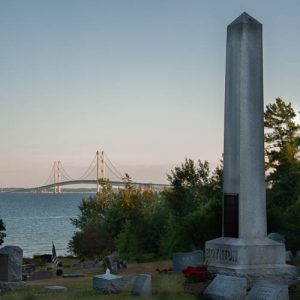 Here are  gravesites that I found and photographed in the Upper Peninsula / Northern Michigan: 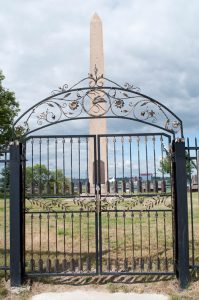 It’s fun to turn off of the streets that you know and look at a “familiar” city with fresh eyes.

We visit Sault Ste. Marie once each year so that we can watch the freighters in the “Soo Locks.” Boats travelling between Lake Superior and Lake Huron use the locks to bypass the rapids on the St. Marys River. Then, we pick up hamburgers from Clyde’s Drive-In and watch the neighboring ferry boat transport cars and heavy construction equipment across the St. Marys River to Sugar Island. Freighters, burgers, ferry boat viewing.

One year, we changed up our trip by looking for historic neighborhoods in Sault Ste. Marie.

We ended up on Water Street, along the St. Marys River. Signs identified four houses at the end of this street as the four oldest in the city. These now operate as a museum with re-enactors, including a man in colonial dress using his cell phone in front of one of the houses. We walked down the street to Brady Park, the former site of French, British, and United States forts, and read all of the monuments.

We then stood outside the gates of a fenced-in cemetery pictured above.  The actual signs in front of the gates read “Ancient Anishinaabeg Burial Ground.”

“Anishinaabeg” means “The People” – The Original People – in Ojibwe/Chippewa. 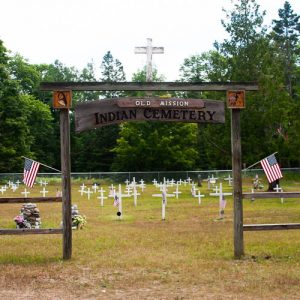 Trees surround this cemetery, but the lot sits next to the premises for Our Lady of the Snows Catholic Church in rustic Hessel. Hessel sits on the shore of Lake Huron, north of St. Ignace and south of Sault Ste. Marie.

I used to attend services at Our Lady of the Snows during our Michigan visits.  I (and some family members) referred to services at this church as “the donut Mass” because parishioners served donuts at a reception after Sunday Mass.

Historians believe that the Old Mission Indian Cemetery dates back to the 1700’s. Most of the graves belong to the Ojibwa (Chippewa) Native Americans from the tribe based in Sault Ste. Marie. The Native American Society for Historic Preservation maintains this cemetery. 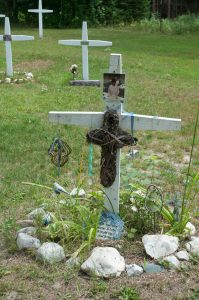 Our Lady of the Snows Catholic Church sits in the Diocese of Marquette. Father Marquette came to Northern Michigan to establish Jesuit missions among the indigenous peoples here. I wish that I knew more of the story about the Catholic parish’s connection to the Ojibwa buried in this cemetery. 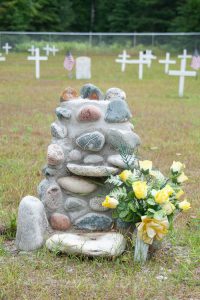 I found much online about the spirit houses that are traditional among several Native American tribes.

Here is a Native American “spirit house” found in the back of this cemetery: 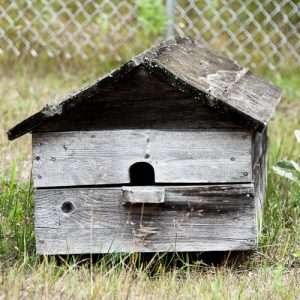 I also found this statue of the Blessed Virgin (Virgin Mary), which is traditional among Christians such as Roman Catholics: 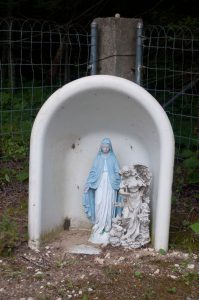 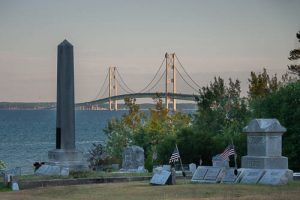 This cemetery sits at the end of a lightly traveled road, next to a walking trail entrance for Straits State Park. I rode my bike here from the house that we rented near downtown St. Ignace. 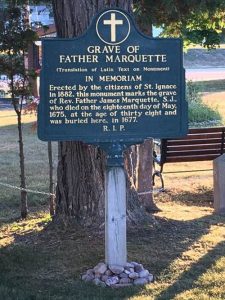 Father Jacques Marquette established a Jesuit mission at a Huron tribal village at the southern tip of the Upper Peninsula. He named this spot “St. Ignace” after St. Ignatius of Loyola.

Father Marquette died young and his followers buried him at least three times.

First, since he died in the wilderness, his companions had to bury him there.

French Catholic settlers returned to his first grave. They dug him up. They boiled him down to his bones. They transported his bones to St. Ignace. They laid his bones under the altar of the original Catholic chapel in St. Ignace.

Father Marquette’s bones now rest next to the Museum of Ojibwa Culture in St. Ignace.

I learned on a guided history walk this year that St. Ignace’s original Catholic church building once stood where this Shell Gas Station now stands. The church’s graveyard adjoined it. The parish eventually built a newer church up the street from this. Since their graveyard ended up in an area of prime economic development, the town dug up and relocated the graves. Did they manage to successfully move ALL of the graves? This remains an open question.

Here’s my personal favorite of the bunch: