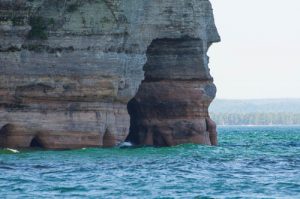 My sisters and I liked to sing “The Wreck of the Edmund Fitzgerald” along with a mixed cassette tape during road trips in our parents’ station wagon.

This ballad by Gordon Lightfoot recounts the real-life sinking on Lake Superior of the SS Edmund Fitzgerald during a storm on November 10, 1975.

As it turns out, my future father-in-law, Dennis Woytek, worked for a radio station in Northern Michigan during this storm. The Associated Press sent him to cover this story as first responders searched Whitefish Bay for the crew.

So of course, I will blog about my visits to Lake Superior before I wrap up my series on Michigan.

My first trip to Lake Superior started with a trip to the Soo Locks at Sault Ste. Marie and proceeded to Whitefish Point, on the tip of Whitefish Bay. (The Fitzgerald sank less than 20 miles from the bay.)

During our drive, we listened to “The Wreck of the Edmund Fitzgerald” on the radio. And then, I kid you not, the radio station broke into the song to issue a severe thunderstorm watch.

Here’s the tip of Whitefish Point: 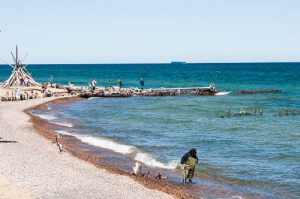 On my first trip to Whitefish Point, the storm clouds held off long enough for me to see all of these.  I dipped my feet in the bone-chilling water. (It was August.) The flies bit my ankles.

We drove southeast back to Sault Ste. Marie, and on the way we stopped at the Point Iroquois Lighthouse. 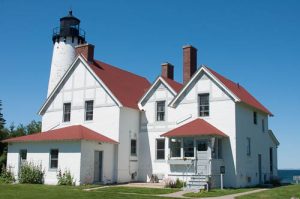 I climbed the lighthouse steps and watched a freighter pass. 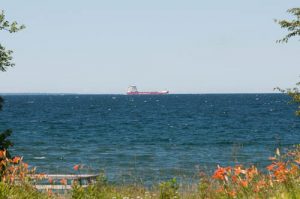 Then the thunderstorm hit. 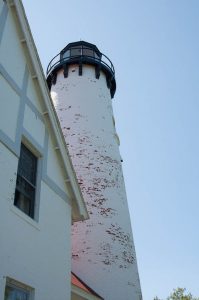 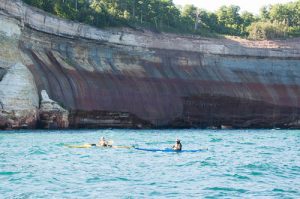 See, sandstone cliffs line this portion of Lake Superior. Mineral deposits (such as iron, copper, and manganese) coat the cliffs. These cliffs reflect splendid colors when the sun hits them.

In late July 2016, Jonathan and I trekked with his parents Denny and Fran to Munising. We actually drove along the northeastern shore of Lake Michigan for part of our trip.

Now, hiking trails do exist along the shore of Pictured Rocks. However, our research suggested that we needed to be on the water or in the air for the best views.

Outfitters rent sea kayaks in Munising. In fact, we saw many sea kayaks during our Pictured Rocks trip. Our group of four didn’t feel confident to paddle on the deep water of Lake Superior. In fact, during the same week that we visited, the Coast Guard had to assist in the rescue of several kayakers along this lakeshore.

A tour company with clear-bottomed boats advertises cruises that show off the local shipwrecks. However, for roughly the same cost as four tickets for this two-hour trip, we rented a pontoon boat for five hours.

We visited the famed shipwrecks that the clear-bottomed boats touted. We also passed these two landmarks: 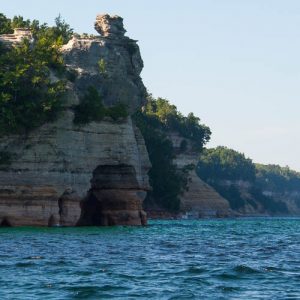 2.) And the East Channel Lighthouse: 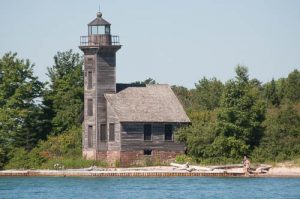 1.) I took all of my photos with a telephoto lens. Therefore, in my photos Miner’s Castle looks much closer than we physically were in relation to it. Since the water was choppy, we didn’t want to get too close to the shore.

2.) The boat concessionaire that we chose pleased us with their customer service. However, we turned around halfway through the trip that the concessionaire recommended for a five-hour rental. Why, you ask? Well, we found the lake very choppy.  (Otherwise, the weather was gorgeous. Not a cloud in the sky. A comfortable breeze. We took our boat trip during a Midwestern heat wave. The bank sign in Munising listed the temperature as 90 degrees.)

Multiple boats from Glass Bottom Shipwreck Tours passed us. We opted not to purchase tickets from their tour company since we preferred to rent our own boat. However, here is their website.  It provides information about the local shipwrecks.