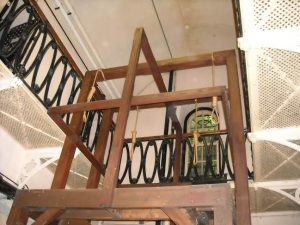 Picture this: your little daughter takes her allowance money to her elementary school’s book fair. Your daughter returns with a book that has an angry-looking skull on its cover.

Your daughter reads these stories to her little sisters. One of these stories involves xenophobia,  a bloody labor dispute, executed miners, and a handprint on a jail cell wall. Your daughters tell and retell this story about the Bloody Handprint at every family campfire for decades.

This happened to my poor mom.

So let me tell you now about the famous “Bloody Handprint” of Jim Thorpe, Pennsylvania:

First, Jim Thorpe wasn’t always called “Jim Thorpe.” In the 1950’s, officials renamed this borough “Jim Thorpe” after the Native American athlete from Oklahoma who was “educated” at the Carlisle Indian Industrial School (in Pennsylvania). That whole story deserves its own blog post. (Or else its own blog.)

Back in the 1800’s, everyone still referred to this town by its original name, “Mauch Chunk.” (This came from the Lenni Lenape people’s name for the nearby mountain. I mean, the irony  . . . )

Jim Thorpe – the former Mauch Chunk – sits in a gorge in the Lehigh Valley. Many inhabitants earned their livings from the coal mined above Mauch Chunk. In the 1820’s, they built the Switchback Gravity Railroad from these coal mines.

The Irish miners fought back against the brutal working conditions. They formed a labor union. Some joined a secret society called the Molly Maguires (the Mollies).

The authorities tried and hung several alleged Mollies at the Carbon County Jail in Mauch Chunk (Jim Thorpe) in June 1877.

Before the hanging, though, one of these men – Alexander Campbell – slapped his hand on the wall of his jail cell and swore his innocence shortly before his execution. He left a “Bloody Handprint.” (In one version of the story that I read, the Handprint started off as a “muddy handprint.” In another version of the story, Campbell slapped the wall so violently that he left blood on the wall.)

This particular jail cell wall still has the Handprint. In the version of the story that I read, this wall has been painted and re-plastered, and the Handprint keeps reappearing.

The old Carbon County Jail where this all happened is now the Old Jail Museum. You can tour this old jail and see the cell with the Bloody Handprint.

All of the photos in this blog post belong to my sister Katie.  The gallows in the top photo are now kept INSIDE the jail museum. However, the actual executions took place outside, next to the jail. 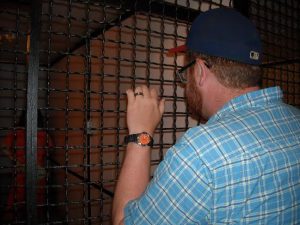 In this bottom photo, my brother-in-law Brendan peers inside a jail cell that held Irish coal miners. (As you will note by his hat, Brendan roots for the Phillies. However, we can forgive him for this since he is good to my sister and my nephews.)

The Old Jail Museum’s physical building witnessed a haunted, loaded history.  As such, it now carries several ghost stories. The museum features these stories on its tours and also on its website.

(One word about the tour: visitors are required to climb up and down several staircases. This is NOT a comfortable tour for people with mobility issues.)

Also, check out these blog posts:

1.) My post about the Switchback Gravity Railroad of Mauch Chunk.