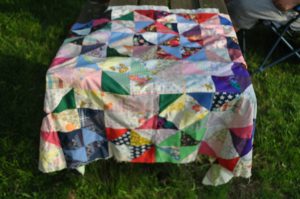 This summer I Googled books that take place in Pennsylvania.

I found The Witch Tree Symbol, by Carolyn Keene, which is one of the original Nancy Drew mysteries.

I once loved Nancy Drew books and I also grew up in PA locales that included Amish farms, so I purchased this book for a fun read.

First, I want to say something about the author: I grew up thinking that Carolyn Keene wrote my favorite Nancy Drew books. It turned out that “Carolyn Keene” was a pseudonym. Edward Stratemeyer hired several ghost writers, including his daughter Harriet, to write the original Nancy Drew books. I learned on Wikipedia that Harriet Stratemeyer Adams wrote The Witch Tree Symbol.

I read The Witch Tree Symbol in one afternoon, in one sitting. I may have also read this book when I was twelve – I don’t remember.

Now, I DO want to call out the original Nancy Drew books for something that has bothered me ever since I was a kid: the constant fat-shaming.  The Witch Tree Symbol brought its own pile of this nonsense. The “plump” characters did a bunch of really dumb things. Some of them (cough, Nancy’s sidekick Bess, cough) talked constantly about food. The author also mentioned throughout the book that the “plump” characters were “nervous.” (The first page of this book made sure to refer to Nancy as slender and attractive.)

So this is how the book started: Mrs. Tenney, Nancy’s “plump” neighbor in fictional River Heights, New Jersey, did something stupid. Mrs. Tenney’s stupidity resulted in the theft of her inheritance. The inheritance included twin coffee tables which were valuable due to a vague GEORGE WASHINGTON connection. The coffee tables were the most highly prized part of the inheritance. However, the fleeing Coffee Table Thief dropped a picture of a Pennsylvania Dutch hex sign.

However, before Nancy found the coffee tables, the Coffee Table Thief managed to convince a significant part of the local Amish farmers that Nancy practiced witchcraft. Several members of the local community expelled Nancy from their property. Nancy could not interview “witnesses” until she convinced folks that she was not a witch.

I learned some new things about Amish culture and cuisine from this story.

I still maintain that The Witch Tree Symbol was a weird mystery.

Spoiler alert: It turned out that the Coffee Table Thief descended from a local Amish family that has seen SEVERAL family members disappear without a trace over the years. Nancy learned about a hidden sinkhole on that family’s farm. The sinkhole sat above a “crystal cave.” Years ago, one of the thief’s distant family members fell in love with a (insert colloquial term for the Romani people that starts with the letter “g”) woman who lived in the woods next to the family farm. This itinerant woman who lived in the woods knew about the sinkhole and the cave. She warned her Amish lover about the cave by hiding a message in a hidden compartment of the genuine coffee table that GEORGE WASHINGTON touched.

And yet, NOBODY  in this story batted an eye at the news that a bunch of Amish people disappeared over the years because they fell down a hole in the ground.  The book said nothing about the whereabouts of all of these bodies. I guess that all of the bodies are still at the bottom of this hole.

So, this book spent over 100 pages fretting about the whereabouts of a bunch of coffee tables. It spent maybe a paragraph discussing the location of several missing people (bodies).

“Carolyn Keene” should have titled this story “Nancy Drew and the Coffee Table Thief.”

(Also, the whole backstory about the Romani people living in the woods is just so 1955.)

So, the “Nancy Drew” creators gave us a fictional story about Central PA witchcraft allegations.

The witchcraft allegations in Part 2 result in death.