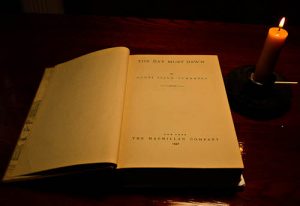 Now I have a real-life tale about a witchcraft allegation that ended in murder. This took place in Stewartstown (York County) in 1928.  So, just like the fictional Nancy Drew mystery The Witch Tree Symbol, this took place in South Central Pennsylvania.

I first heard about this event through Aaron Mahnke’s Lore Podcast. If you want to listen to Aaron Mahnke’s tale, it is Episode 62: Desperate Measures, dated June 11, 2017.

Keep in mind the following:

So here’s what happened: in the late 1800’s / early 1900’s, a man named Nelson Rehmeyer lived in a farmhouse in what came to be known as “Hex Hollow,” also known as “Rehmeyer’s Hollow.”

Rehmeyer practiced “pow-wow medicine,” or “pow-wowing.” This practice depended on traditions of some Pennsylvania Dutch, as well as on the book Pow-Wows; or, Long Lost Friend. “Pow-wow medicine” included elements of faith-healing and witchcraft.

As Blymire grew up, he studied “pow-wowing” himself. He set up his own “pow-wow medicine” practice.

However, as Blymire entered his 30’s, his health failed him again. He suspected that somebody put a hex on him.

In 1928, Blymire consulted Nellie Noll, the famous local “River Witch of Marietta.” Noll “confirmed” to Blymire that Nelson Rehmeyer had put a hex on Blymire.

Blymire believed that he needed to destroy Rehmeyer’s copy of Long Lost Friend and also bury a lock of Rehmeyer’s hair in order to break the hex and restore his own health.

Blymire recruited two teenagers to help him break into Rehmeyer’s house in “Hex Hollow.”  They confronted Rehmeyer. They demanded that Rehmeyer surrender his copy of Long Lost Friend.

Rehmeyer refused to surrender his book. So, the trio beat Rehmeyer to death and then they set Rehmeyer’s house on fire in hopes that this would break the hex.

The house did not burn down. All three men were tried, convicted, and imprisoned. The “York Witch Trial” made national headlines.

York County renamed the hollow “Spring Valley Park.” Per my review of the county website, the public can rent a picnic pavilion at this park.

Disclosure: I was born in South Central PA. I lived in rural Perry County until I turned seven. My family patronized Amish businesses there. I’ve never been to Spring Valley Park. Also, I’ve never been to Dutch Wonderland, the amusement park in Lancaster. My family visited Knoebels Grove instead.

What experiences have you had in Central Pennsylvania?