So, a little bit over a week ago, my maternal grandmother died. Grandma Margaret.

Grandma celebrated her 90th birthday this past summer. In fact, she celebrated her birthday during the week between my birthday and my sister’s birthday, and several other family birthdays occurred during this same week. Grandma left behind a lot of people who loved her. However, I understand that all or almost all people who live to the age of 90 lose much. My grandfather died several years ago. And, as Grandma reminded me, she herself had only one sister, named Shirley. Shirley died of cancer in her 20’s. About two years after the first Shirley died, my grandmother had my mom and she named my mom Shirley. My mom, the second Shirley, died of cancer three years ago. Grandma wondered about this to me. She wondered about the odds of losing both of her Shirleys to the same disease, decades apart.

But, I remember something completely different now. After my mom died, I sat and looked through Grandma’s photo albums with her. We looked through an album consisting mostly of photos that Grandma herself took. Grandma took A LOT of photos of sunrises and sunsets. She took some of these photos when she visited my uncle in Florida. She took other sunset photos over the winter countryside after my grandparents retired and moved out to farmland in Beaver County and raised goats. She took them with her point-and-shoot camera. She paid to develop them, then put them into her photo albums along with her photos of her family.

I learned that day that when I enjoy a sunrise or a sunset, I owe this at least in part to Grandma Margaret.

Sunrises are beautiful. Sunsets are sad but also beautiful. Neither exists without the other.

My sister, Katie, blogs about her adventures. Here is Katie’s new post Adventuring With Katie at Shenandoah National Park at Skyland and Old Rag Mountain

Eight days ago (so, on April 29), Jonathan and I celebrated our fifteenth wedding anniversary. We were married at Mount Saint Peter in New Kensington. Jonathan’s late mother, Fran, worked at the parish at that time. So, I have a special place in my heart for Mount Saint Peter.

The clouds moved just in time for me to witness the sunset.

My husband, Jonathan, and I recently purchased a sailboat, S/V Pinniped. We dock Pinniped in Erie, PA. Here are Jonathan’s most recent updates on sailing:

A few years ago, Jonathan blogged about an Erie lighthouse:

Then, I wrote Don’t Give Up the Lighthouse; Erie Land Light Part II.

I also previously blogged about the time that we saw the U.S. Brig Niagara sail past us under full sail at Presque Isle State Park.

Jonathan and I actually left the bay and sailed on Lake Erie (the open lake!) for the first time together yesterday. Check back for future updates!

Once upon a time, I followed my husband Jonathan on his business travel to London. We rented a car. We drove to Tintern Abbey, in Wales, on the River Wye.

Well, Jonathan drove our British rental car on the left side of the road. Jonathan maneuvered the traffic circles (roundabouts). I navigated.

Here’s the first road sign that we saw after we crossed the line into Wales. Note that the first three lines of this sign are in Welsh and the final three lines are in English:

The government runs this landmark as a day-use attraction, so it closes before the sun sets. The staff ends ticket sales 30 minutes before the attraction closes for the day. We got lost and then we arrived at Tintern Abbey about an hour before it closed.

But we made it!

Cistercian monks established and maintained Tintern Abbey between 1131- 1536. Tintern Abbey closed in 1536 during the Dissolution of the Monasteries. Here are some of the things that happened:

1.) The monarchs in England used to be Roman Catholic.

2.) The Protestant Reformation began in Saxony (Germany) in 1517.

3.) Henry VIII of England wanted to end his first marriage to Catherine of Aragon in 1533 so that he could marry Anne Boleyn.

4.) Henry VIII rejected papal supremacy. Parliament passed a law establishing Henry as the head of the Church of England.

5.) In the Dissolution of the Monasteries, Henry closed all of the monasteries, including Tintern Abbey.

6.) Henry’s agents stripped the monastic property of anything and everything valuable, including the lead roof.

(In Anya Seton’s novel Green Darkness, one of the main characters lived as an English monk in a different Catholic monastery. Henry VIII also closed this monastery during the Dissolution of the Monasteries. The novel detailed how Henry VIII’s officials plundered that monastery of its valuables and banished the monks. At least one of these monks fled to France. Many of them remained in England but hid from the Protestants during the reigns of Henry VIII and Edward VI. The King’s officials grew their own wealth by closing the monasteries. See my prior blog post about Anya Seton.)

The band Iron Maiden filmed their music video for “Can I Play with Madness” partly at Tintern Abbey.

Wikipedia taught me that Allen Ginsburg tripped on acid here in 1967 and then wrote his poem Wales Visitation.

The Wye Valley Railway established a station near the Abbey in 1876. Though prior tourists visited Tintern by boat, fashionable Victorians could now access it by train.

We left the Abbey and grabbed dinner at a local pub. Other patrons spoke Welsh to each other.

We drove through the rural darkness back to London.

Watch for my upcoming blog posts about my adventures in travel. 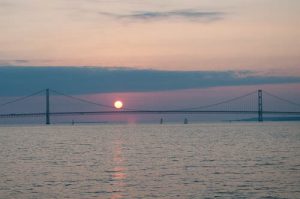